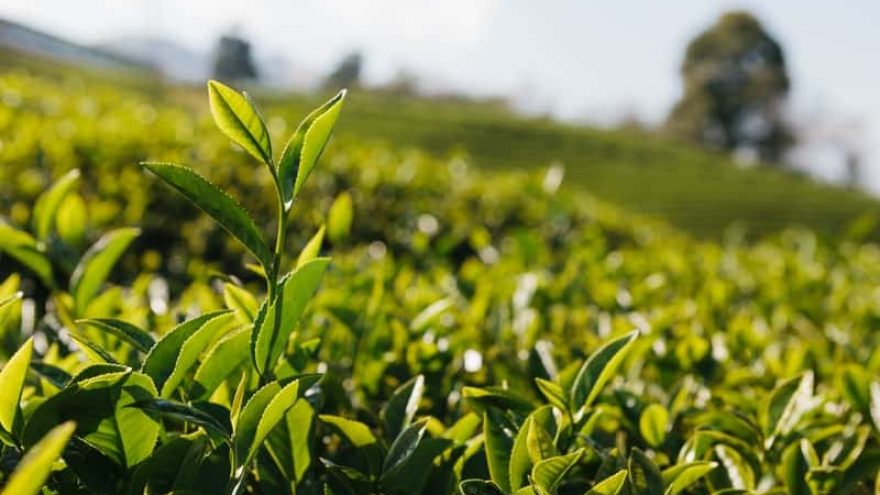 Deciding what to put in your mug in the mornings? Both white and black teas originate from the same plant and have been used for thousands of years. Although white tea isn’t as well-known as black tea, it can offer tremendous health benefits and tastes great.

Is black tea good for you? What about white tea? Today we’ll discuss white tea vs black tea and the key distinctions between the two.

Both teas come from the Camellia Sinensis plant. When it comes to harvest and manufacturing procedures, however, they differ significantly. The variations in processing affect taste, quality, and the potential health benefits.

Although white tea isn’t well-known, it’s one of the most delicate teas available, and usually among the most expensive as well. (1) The young leaves are harvested before they’re fully opened still coated in fine white hair, hence the name white tea.

Leaves are handpicked, steamed, and carefully air-dried. This method means white tea is the least processed or oxidized, resulting in a fresh, light taste and a higher nutrient level than other teas. (2)

Unlike white tea, black tea is left to dry longer. Leaves are fully oxidized before being processed with heat and then dried. This gives the leaves a darker color and the tea a reddish hue when infused.

Manufacturing tea in this manner results in a much stronger taste, particularly when compared to white tea. For even higher oxidation and deeper flavor, tea leaves are cut into smaller pieces in a process called “non-orthodox” or CTC processing. 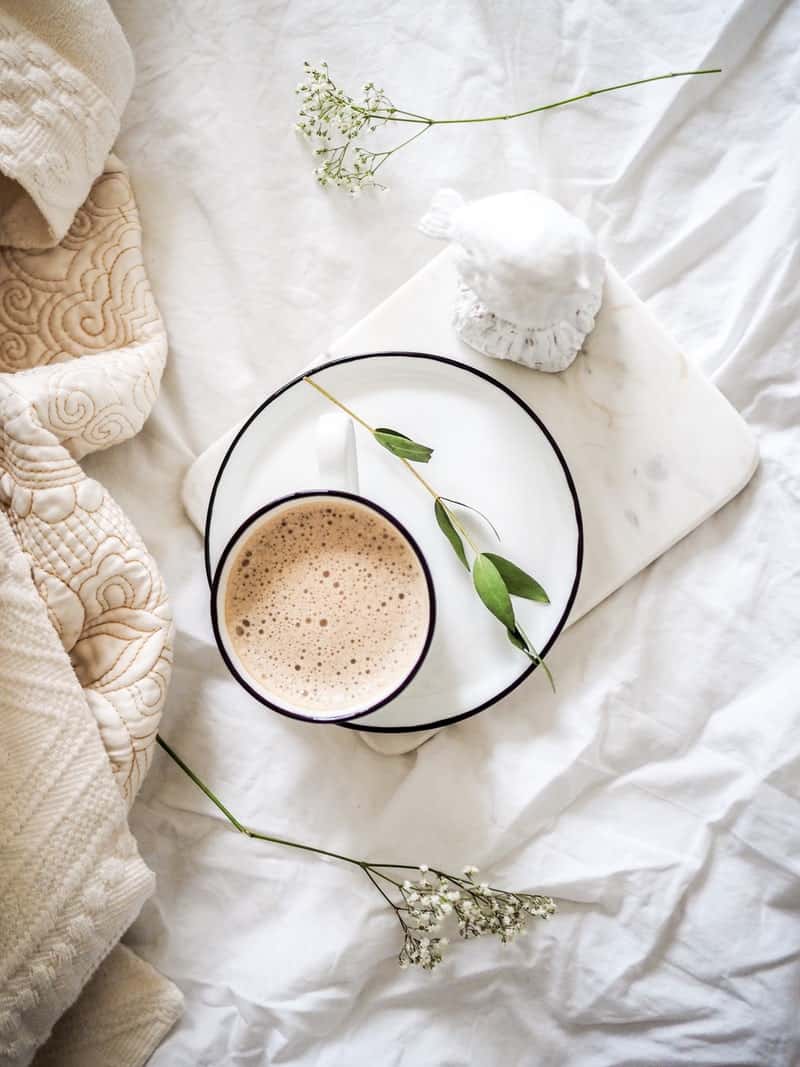 Although they’re commonly referred to as simply white tea and black tea, both actually come in several varieties. It’s important to keep in mind that within the white tea category, for instance, quality and the resulting benefits can vary significantly.

The best white teas originate from the Chinese provinces of Fujian and Guangxi. They come in four primary grades and types, which affect both taste and health benefits.

Unlike white tea, half of all black tea production comes from India. You may have heard of Assam and Darjeeling teas. Sri Lanka and Kenya are other large producers of high-quality back teas.

Although there is an unlimited number of tea brands, you won’t find different black tea categories as we’ve described for white tea. Quality, however, varies based on the method of production.

Because white tea isn’t highly processed, it contains a significant number of antioxidants and polyphenols. (4) They’re able to neutralize free radicals, which cause all sorts of damage including skin aging and cancer, throughout the body. (5) White tea may also inhibit cell proliferation in colon cancers. (6)

Black tea also helps to reduce oxidative damage in the body. Just like white tea, it produces polyphenols called catechins. (7) It also contains powerful flavonoids that showed plasma antioxidant activity one hour after consumption (when drinking one to six cups per day). (8)

As we discussed, both types of tea contain polyphenols (9). Although more research is required, these compounds have been shown to protect the cardiovascular system. (10) They should help prevent diseases and keep you healthy (11).

Many studies have focused on black tea and its ability to maintain good cardiovascular health and the findings are compelling. Triglyceride levels decreased by 35.8 percent when black tea was consumed over 12 weeks. (12) During the same amount of time, the amount of cholesterol, including the “bad” LDL cholesterol, also declined by 16.6 percent.

In addition, black tea has shown positive results when it comes to lowering blood pressure. Drinking four to five cups a day can lower blood pressure levels by 1 to 2mmHg. (13)

Although white tea has less caffeine than other teas, it should help you shred a few pounds. First, it’s known for its ability to break down fats and prevent new fat cells from forming. (14)

Besides, you should burn four to five percent more energy and burn 10 to 16 percent more fat. An overall increase in your metabolism should help you reach your weight-loss goal faster. (15)

Weight loss can be achieved by drinking either type of tea. Black tea mainly promotes weight loss by increasing energy and maintaining a healthy gut. Although white tea contains less caffeine, it’s efficient at breaking down fat cells and boosting the metabolism.

Fluoride naturally occurs in various plants, and both black and white teas contain this compound.

White tea contains about 52.19 mg of fluoride per kilogram and is well-known to protect teeth from cavities, decay, and plaque. (17,18) Black tea’s fluoride levels meanwhile have long been underestimated. We now know that black tea can provide double the amount found in white teas.

While both teas can assist with good oral health, it’s important to monitor the overall daily consumption of fluoride.

In combination with fluoride, the tannins found in both teas should protect your tooth enamel. (19)

Both white and black teas contain fluoride, reducing the risk of cavities and the creation of dental plaque. Black tea is the winner in this category with 99.74 mg of fluoride per kilogram, versus 52.19 mg in white teas.

Research has shown that white tea can help regulate sugar levels in the blood and prevent insulin resistance. (20)

This health benefit has been studied even in-depth and black tea was found to have strong anti-diabetic activity. (21) It helps reduce glucose levels in the blood for both preventive and curative measures.

White tea can keep you healthy and germ-free. It’s shown to be more efficacious than green tea in reducing the growth of various bacteria and viruses, including pneumonia. (22) On top of being antiviral and antibacterial, white tea fights fungal infections.

Black tea also has strong antibacterial properties. One study suggests it is more effective against Streptococcus Mutans bacteria than both white and green tea. (23).

When we consider teas, we generally think of the stimulation offered. A less considered benefit is that both white and black teas can also help to relax the mind and ease anxiety.

Indeed, they both contain the L-theanine amino acid, which has shown a direct impact on the nervous system. (24) Throughout the day, our brain goes through different wave patterns, affecting our state of mind and alertness.

L-theanine is able to reduce alpha waves, helping us to relax without feeling sleepy or drowsy. The level of this compound in tea greatly varies based on the processing method.

Generally speaking, white tea tends to contain slightly more L-theanine than black teas. (25) Some black teas, however, such as Earl Grey can show higher levels than the white type.

While each tea contains caffeine, the amount found in each varies.

White tea’s caffeine content differs according to the production method but it generally has between 6 and 75 mg of caffeine per cup. If you’re looking for a less stimulating white tea, opt for loose leaves rather than tea bags.

Black tea can contain up to 120 mg of caffeine, which is still half the amount in a brewed coffee but almost double that of white tea. Studies even reported better cognitive function, including increased accuracy and alertness. (26) Auditory and visual senses were also improved.

Both teas come from the same Camellia plant. So it isn’t surprising that the benefits appear similar. Overall, scientific papers on white tea’s health benefits are more limited compared to the literature available on black teas.

Nevertheless, white tea is increasing in popularity as more studies are completed and shared.

White and black teas offer strong antioxidant, antibacterial, and anti-diabetic properties. If you’re looking for a morning boost though, the greater amount of caffeine in black tea should get your day started faster.

If, on the other hand, you’re searching for a drink with a gentle and light taste, white tea might be the way forward. It may even reduce stress and promote a more relaxed state.

As we mentioned, the best teas, both white and black, often come in loose-leaf form. The same leaves can even be used for several brews. In this case, let them infuse a few minutes longer than your first batch.

Use between two to two and a half grams of white tea per six-ounce cup. Do not pour boiling water over the tea leaves, the hot water should only be heated to 185 degrees Fahrenheit maximum. Too hot and you’ll have bitter tea with little flavor.

Equally important, steep your tea for about four minutes. Leaving it too long can destroy antioxidant compounds, taking away many health benefits. (27)

Concocting black tea is a fairly similar process. The tea leaves, however, can handle higher water temperatures, between 200 to 212 degrees and are steeped for up to five minutes.

When it comes to storage, white and black teas get along. To ensure they remain fresh and flavorful, here are a few recommendations:

Although black and white teas offer many health benefits, it’s important to remain aware of the few downsides associated with over-imbibing.

White tea doesn’t come with many precautions or contraindications. Although it contains one of the smallest amounts of caffeine compared to other types, three to four cups a day can leave you overly-stimulated. It’s best to avoid drinking white tea before going to bed or if you’re very sensitive to caffeine intake.

Furthermore, white tea contains the highest amount of fluoride. Keep in mind that fluoride is already in our daily lives in the form of our drinking water and most toothpastes.

Consuming 6 mg or more of fluoride per day may engender an increased risk of bone fractures. (28) Finally, and because of this compound’s presence, caution should be taken when consuming white tea during pregnancy (29).

Just as with most caffeinated drinks, drinking more than four or five cups per day can lead to the following side effects(30):

Because of its high tannin content, black tea also increases the secretion of gastric acid in the stomach, which can lead to burning sensations. (33) To reduce this side effect, try adding sugar and milk to your brew.

Lastly, you may have heard that black tea reduces iron absorption. In fact, more studies need to be completed to confirm this allegation.

If you suffer from an iron deficiency, it is, however, best to drink between meals or at least one hour after food intake. (34) If this isn’t possible, make sure your meal contains plenty of vitamin C and proteins. (35)

Although both types of teas come with similarities, they’re different in many ways, from their processing method to health perks and downsides. Here is a short summary:

All in all, we love both teas. They’re ideal for different times of the day and various situations. If you’re looking for a strong morning tea, select high-quality loose leaf black tea.

If you want to cool down after a busy day, try a cup of white tea, ideally the Silver Needle variety. It should help you relax while keeping you alert enough to continue your daily activities.

Whether black or white tea, watch out for your daily consumption. Black tea could increase stomach acids, irritating the stomach. You might also have a hard time falling asleep or notice a higher anxiety level.

Although white tea has few contraindications, fluoride levels should be monitored. Excess consumption could also over-stimulate someone sensitive to caffeine intake. 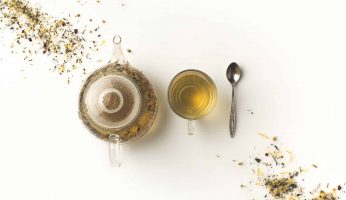 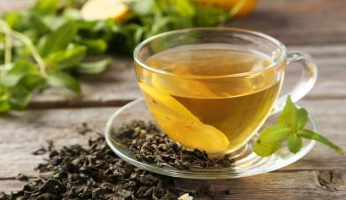 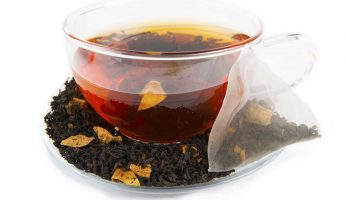 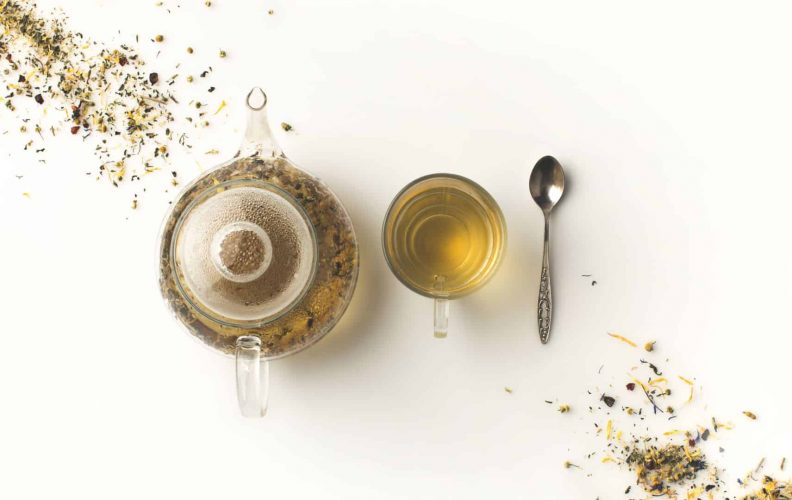 Best White Tea Brands Reviewed and Compared
41466
Food & Beverages
Newsletters
Sign up for free newsletters and get more of TheFitBay delivered to your email inbox.